Due to be relaunched, Tes Elements platform needed to be improved as it suffered from an array of issues: discoverability within the Tes universe, the product offering not being clear enough and not being visually on target with the audience.
The desired outcome was a product whose UVP was clear from the start, and could be easily found by those who searched for primary or secondary resources - while improving discovery and navigation within the product. With this in

Primary and secondary teachers and - indirectly their pupils. It is interesting to notice how - even though the subscription was aimed at teachers - research showed us how they responded better to a branding and visual language that was in line with the need of their students (more colourful and playful), as a proxy of what they could expect from the resources themselves.

Redesigning the entire experience of the product, the UI, the UX, the branding and illustrations, prototyping the various iterations to test with the users. 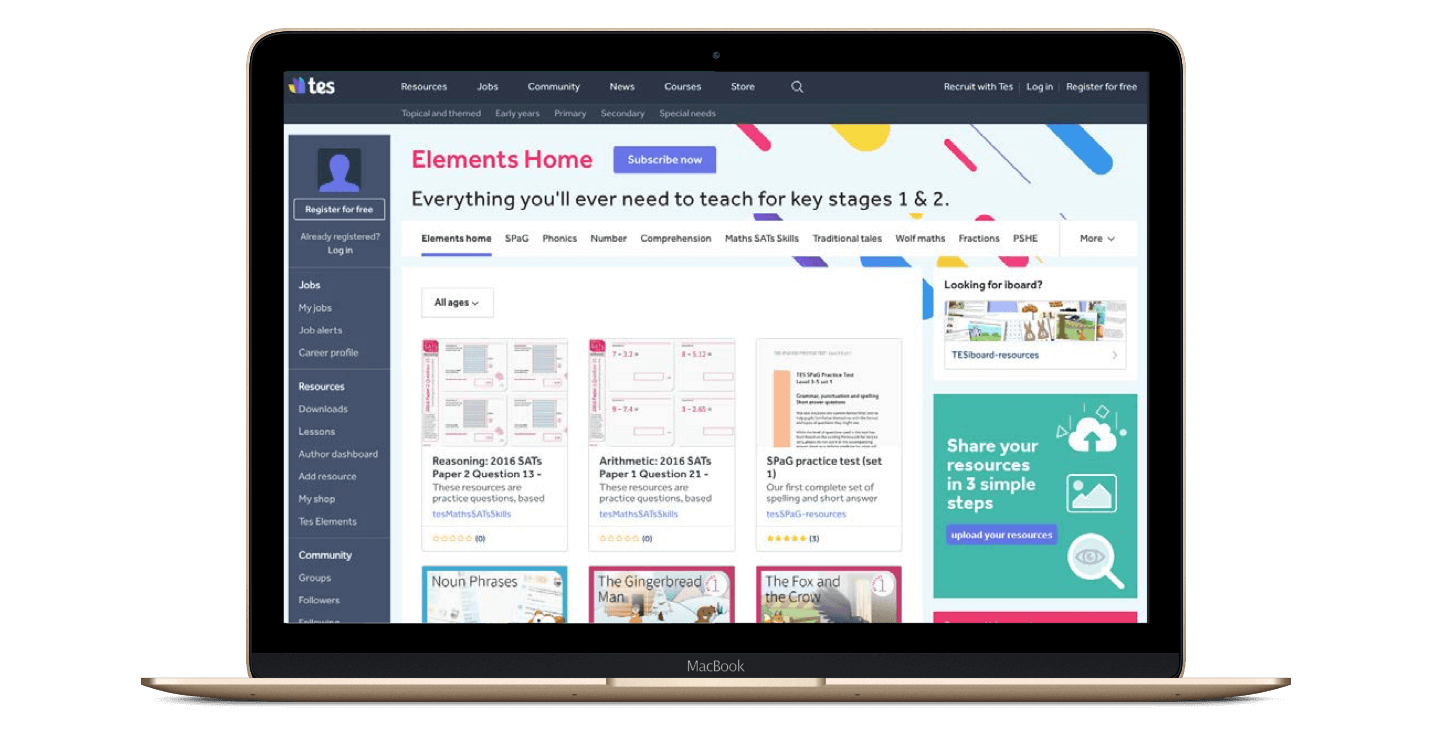 The previous implementation, with the 3 columns layout and the navigation at the top. The navigation was just one layer deep, while the taxonomy itself would span over 3 layers of depth.

Most of the limitations had to do with the constraints brought by the three columns layout to which we had to adhere in the redesign. Another requirement was that the taxonomy of the offering had to be always visible to the user.
An additional challenge was that the existing branding of the product was unsatisfactory (there were a number of different sub branding components within Elements itself) and needed to be refreshed. 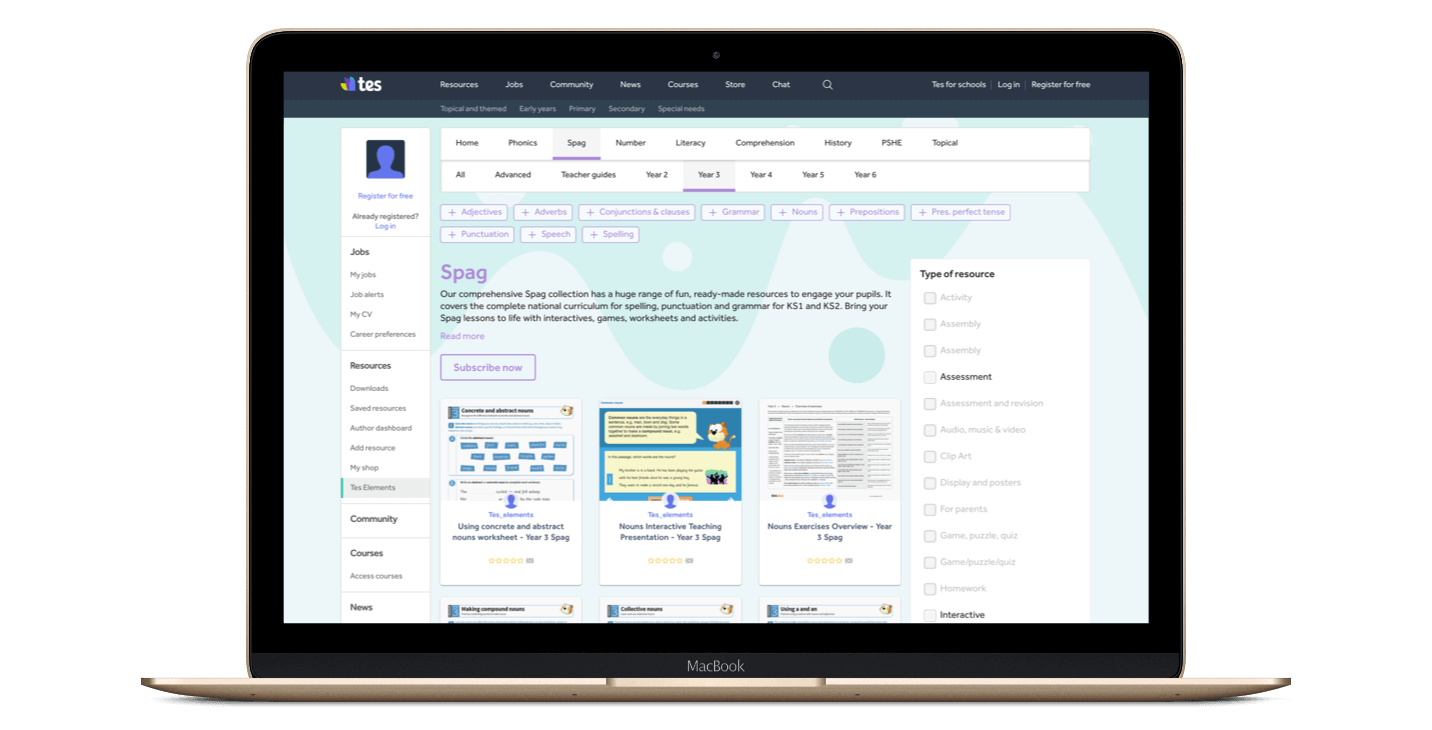 An overview of the new version's navigation, with the 3 layers representing the taxonomy and the right hand column used as a filter to find a specific type of resource.

Detail interaction of the navigation.

The solution was focusing on the ease of navigation and strength of the visual identity.
A complaint that users made during testing of the old version was that it was hard for them to understand that they were browsing Tes Elements and the browsing experience had many friction points (one being the unclear and arbitrary taxonomy, detached from the rest of the resources marketplace).
So, following a redesign of the taxonomy based on the national curriculum, the idea was allowing the users to easily follow their path while browsing and doing so by having clear clickable UI elements to support the ease of use.
The first step in getting the navigation right after a first approach, was testing it with the help of the UX researcher with a group of teachers, where we found out that the pattern chosen to select among the third layer of categories was not clear.
The second iteration - which flipped the pattern around, turning the “everything selected” status into a default - fixed the issue getting a positive feedback around the UI element (“it looks like a button, so I know I can click on it!”). A stronger “more primary” feel was also a major point of interest during testing, where teachers felt that the product they were browsing was suited to their needs and approached the whole experience with a different expectation. 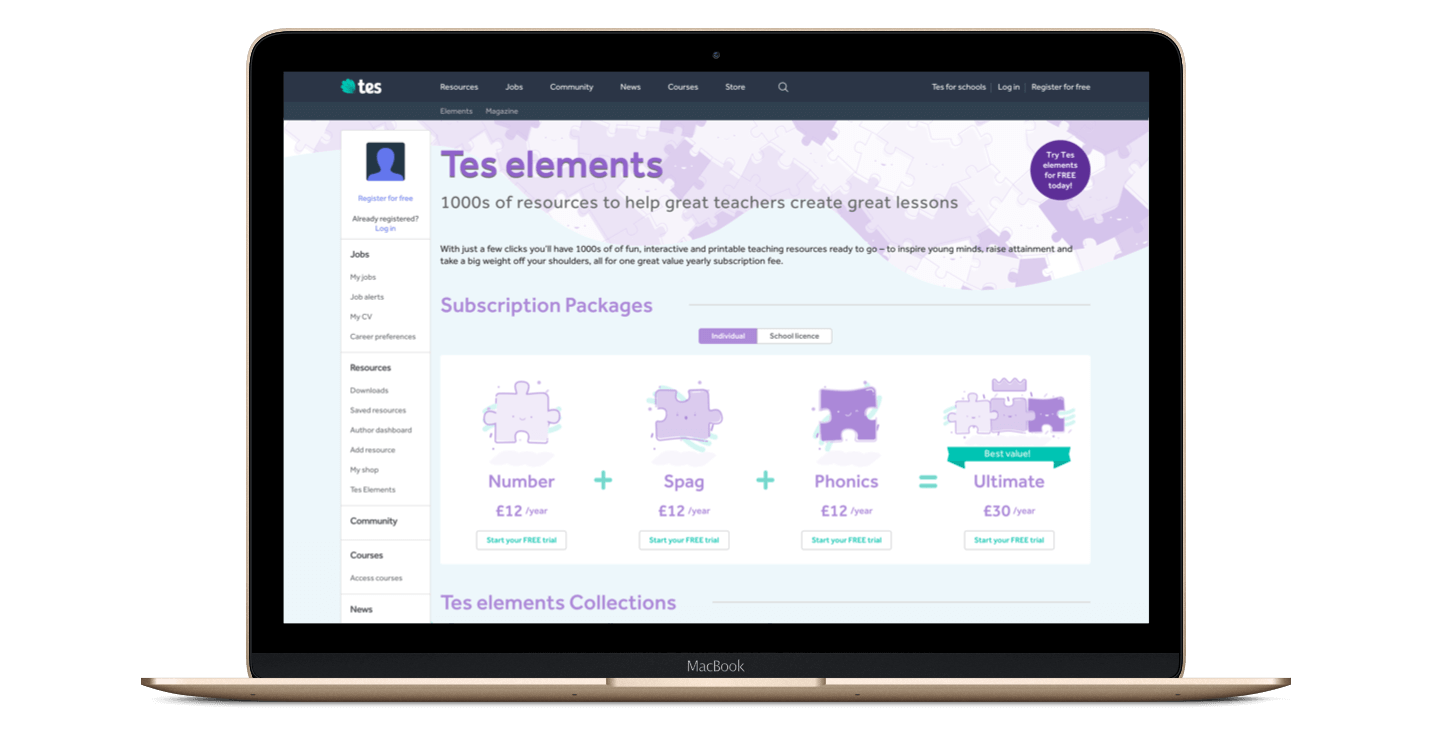 First section of the homepage, where it was pivotal to communicate pricing and offer very clearly.

Being a true product within a product, the impact should be both measured on itself and on the wider product (Tes Resources marketplace).
The impact of this new version of Tes Elements on the wider product it is a part of (Resources marketplace) is to make the universe of teaching resources more accessible and also to secure a section of the audience that had been feeling left out (a common complaint is that Tes Resources are too focused on secondary students).
This latter also being achieved with a stronger product identity and branding, for which I took particular engagement in.
Moreover, in terms of reducing friction for the users looking for relevant content (this was a Q4 OKR), the new navigation served to lay the ground for a similar navigation in the resources product. 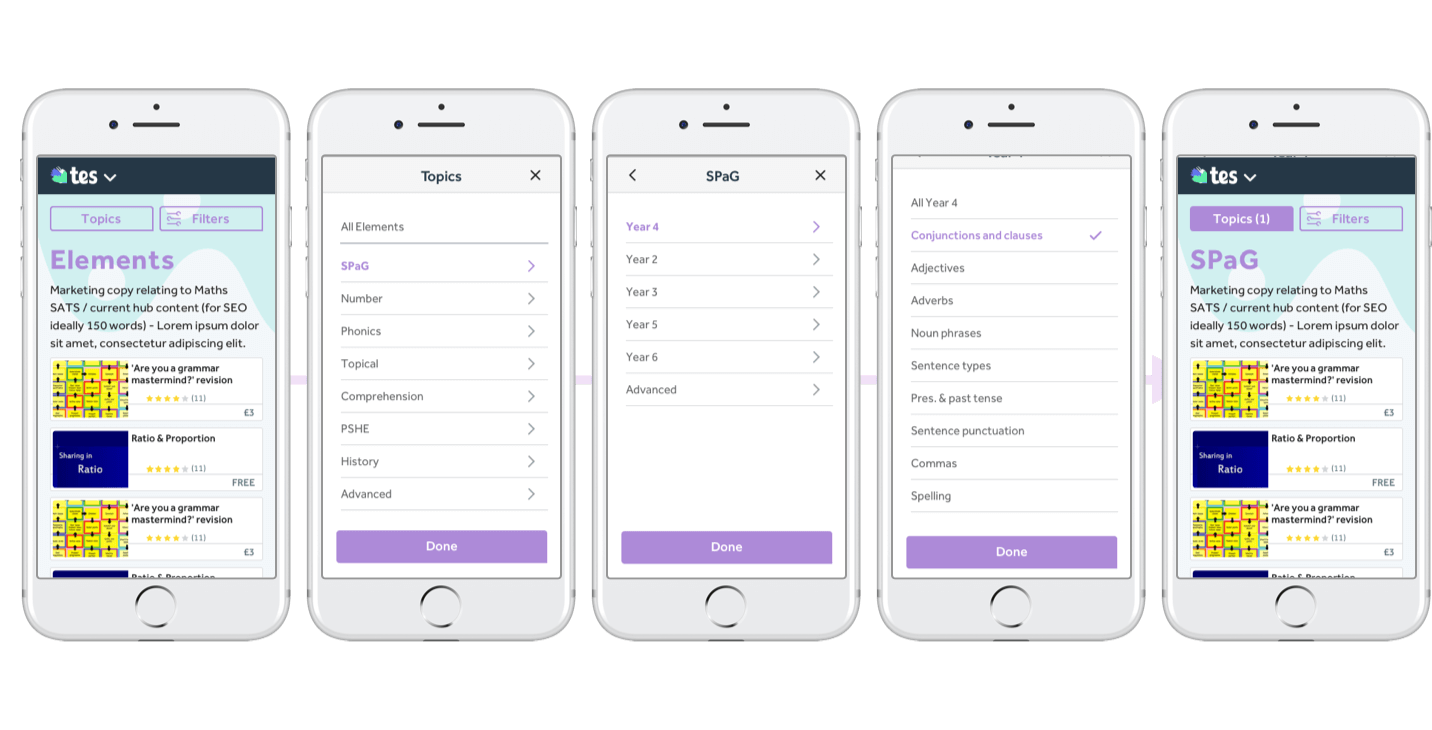 Another issue to solve was the mobile navigation. Above, the screens to select one topic and then a sub topic.