Soldo Business is a payment platform that allows companies to control more efficiently their employees' spending both on the web and on the go, with the mobile app.

Soldo being a financial platform, users - companies, in this case - need to register as they would for any other financial service. The registration process at the time there was composed by 11 different steps (on a Typeform form) which varied from “what is the size of the company” to entering the full address of the director of the company.

becoming active was a reality and it became clear that we needed to rethink the way we onboarded people. Another related issue that arose was the need for new users to have more clarity around what they could do or needed to do on their first access to the Soldo console. This left the users the only choice to ask CS, thus flooding Intercom with requests.

All new customers would be impacted by the redesign of the onboarding process. At the time (2017) of designing the feature, the most part of companies that registered with Soldo were small to medium size companies.

Analyzing and gathering the registration requirements, design a new flow inclusive and new views, write user stories, find with the other designer on the team the perfect solution, presenting and discussing with stakeholders.

Flow-wise, the limitations included mainly the legal restrictions and information that the registering users needed to provide in order to complete the process.
Following regulations and making sure we were compliant was a big part of the task, which saw me getting feedback and approval from the Risk Manager on a daily basis while working on the project.
A further challenge was designing for both the IT and UK flows, each with their different set of required information due to the different national regulations.

The solution was finding which were the friction points (by analyzing the data from the registered users vs the active users and complaints received from the CS) and try sorting them out by providing the user with better feedback on their current stage in the process and emails that punctuated the process.

Improvements were also made to automate the task of entering the huge amount of information needed: introducing search postcode instead of manually entering is, GoogleMaps autocomplete, turning open-ended questions into multiple options. 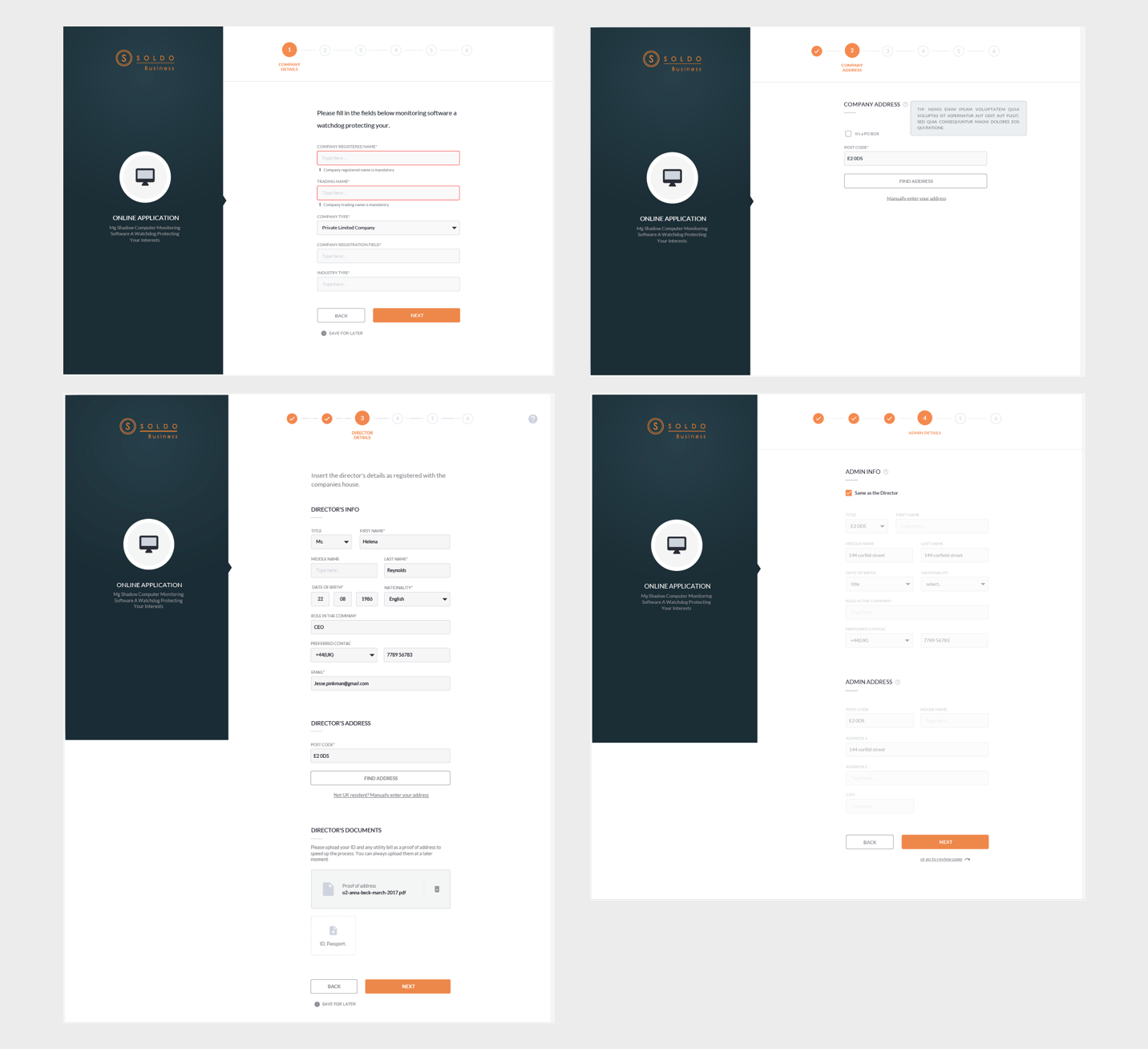 A sample of the screens of the final onboarding screens.

The changes allowed not only to convert and onboard more users, but also to set the table for the scaling process that was beginning. This mainly because the changes made brought improvements to the experience of the other actor of this process - the internal operator - and opened the way to further improvements down this road. The completion registration rate went up by 2.3%.

This furthermore opened the way to a new feature within the Soldo Console - for which I am proud to say I personally pushed - the walkthrough. Now users are accompanied by call outs to the UI elements when they need help or when a new feature is available.

Some screens of the walkthrough call outs during the first deposit.